Who would ever drive a car with dents?
I think no one.

Whenever possible, every car owner would ensure that their car is always looking attractive despite the number of years it was used. With the kind of technology we have today, it is easy to repair those pesky dents using Paintless Dent Repair or PDR as it is commonly known. But then, you must understand that repair depends on the type of damage that your car has.

Innovation often brings great achievements in various industries. Then there are areas where innovations are limited because little change of some significance occurs. Cars, for example, have not changed much over the past two decades. Yes, there have been many variations on the car size, the use of biofuels and other changes.

The body of a car changes little from model to model and from year to year. Because of this, common car repairs like oil change remains unchanged. However, in recent years we’ve seen innovation in ways of repairing dents on the body of cars. Paintless Dent Repair is a radical departure from previous methods of repairing dents. Best of all, the most radical of this type of service center elements on the speed at which the repair work may occur as well as the significant reduction of costs associated with paintless dent removal. In a way, dent removal without the painting process is often regarded as a huge success that will continue to grow in popularity as time progresses. 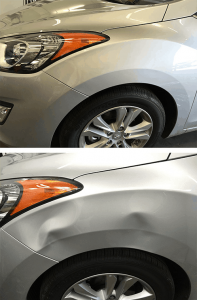 The paintless dent repair industry has grown significantly in recent years. Fast, efficient and effective repairs have greatly contributed to the increased demand for the service, technicians, and improvement of technical and process management. A major breakthrough in the industry comes from the adoption of dent removal services without painting by car insurance companies and their choice to prefer these services on the repair techniques of conventional panels.

But what exactly is the work of Paintless Dent Repair (PDR)? Basically, it is a dent repair method that is centered on the molding and shaping the area of the dent of a car to its original position. This is done without replacing expensive parts or having to repaint large parts of the automobile. Obviously, this keeps costs and significantly reduces the amount of time needed to make car dent repairs.

Car paintless dent removal is a process in which dents are removed from a vehicle without using conventional repair methods that require to panel beat and re-spray the car. Dents are removed from the car by massaging using specialized tools or pulled using a glue system. The removal process does not change the paint which means that the vehicle will not need to be re-sprayed and factory paint protection is maintained.

In addition to preserving the long term value of cars, the process of paintless dent repair is significantly faster than conventional methods. Among the many benefits of PDR, the most notable is in favor of the customer, which is the price. The average cost of repairs over conventional methods is half and the quality of repairs is as good or better in most cases.

Benefits of paintless dent removal
Whether you want to save your time and money or simply to make a more educated choice regarding your car, there are many reasons why a paintless dent repair has become the preferred choice for car bodywork.

It keeps the value of the car.
Car panels that have been repaired using the work of traditional workshops almost or always contain body filler and auto pain which are more detectable to the eye and also harm the overall value of the car since you no longer work with the original exterior. Even if you cannot see the work, the addition of these materials means that your car is worth less in the long run. Paintless dent repair is based only on the expertise of professional and gentle dent removal tools, leaving the value of your car when it comes to time sell it.

Make an eco-friendly choice.
When you opt for paintless dents repair, you almost never use automotive paint or other expensive materials and environmentally hazardous. Traditional painting and body shops rely on chemicals in the form of primers, varnishers, automotive paint, body filling, and paint thinners to repair a dent on a vehicle. paintless dent removal works by massaging the metal of your car and return to its original shape without the need for added materials. From beginning to end, there are no chemicals released into the air or dumped.

Keep a low overall cost.
Because you do not have to pay for car paint or filler materials of the body or labor involved in using these substances, you pay less for paintless dent repair compared to the work you get from traditional painting and body shops. In most cases, you end up paying about 50 percent less than the repair of the traditional body.

Save time.
You save a lot of time with paintless dent repair because your car is repaired without replacing expensive parts or having to repaint large parts of the automobile. Traditional body and paint shops cannot offer this option because of the materials they use and the time to repair them. In fact, you may end up having to leave your car at a traditional workshop for several days before it’s ready to hit the road again.

Getting your car picture perfect and back on the road has never been easier. From mobile services and ecological-friendly materials to lowered inconvenience and an increase in your car value, the reasons why paintless dent repair has become the most popular dent removal choice are clear.